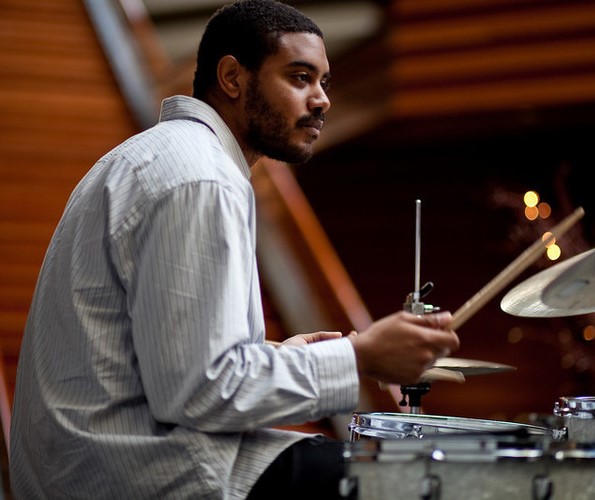 Nurtured in the legendary Philadelphia jazz scene, Wayne Smith, Jr.’s career as drummer is as promising as it is eclectic. After graduating from the famed Creative and Performing Arts High School, he went on to study at the world renowned Berklee College of Music in Boston. Eager to advance his music career, Wayne began performing regularly at staples of the Philadelphia jazz community including Chris’ Jazz Cafe and Ortlieb’s Jazzhaus. As his reputation grew, he branched out, performing in New York, Baltimore and Washington D.C alongside such well known musicians as Donald Byrd, Orrin Evans, Duane Eubanks, John Ellis, Stacy Dillard and Bootsie Barnes.  He teamed up with Victor North (saxophonist) and Lucas Brown (organist) to form Three Blind Mice and the trio still performs together to this day. After being tapped to join the legendary Sun Ra Akestra, Wayne toured Europe, Canada, and Australia, which would prove instrumental in his development as an artist.

During his travels, Wayne was exposed to a variety of musical genres and styles that piqued his interest and stimulated his musical growth. He began to explore a blossoming interest in rock music, anchoring a group that went on to do multiple recordings. He also began to pursue relationships with other musicians. It was during this time that he reunited with a former band mate, pianist George Burton. “I’ve known Wayne since I was about 16 years old. He was the first drummer I used regularly. Over time, I started using different cats to try to get a different feel on my music. But, the problem with that is that after every gig I always thought ‘if Wayne had played, he would have murdered it’, so I always went back.”

With a heightened passion, Wayne developed his now signature playing style that revels in the dynamic interplay between musicians. His experimentation inspired a new musical sensibility; one that remains grounded while still ferociously ambitious.  Tim Warfield (acclaimed tenor saxophonist and Temple University professor) has described Wayne as an “inventive drummer who displays an in-depth musical consciousness, quite willing to embrace the moment, yet never losing himself nor the tradition in the search.” Jazz guitarist Steve Giordano agrees, stating “I love playing with Wayne as his natural feel and energy always adds to my compositions in his unique way. Even when he just lays it down, his feel is so good that the music always swings.”

Recently, Wayne has showcased his unique style in New York City, performing at Smalls Jazz Club, Smoke, Zinc Bar, and Fat Cats. A growing network of musicians, including Darryl Yokely, Lars Haake, Nina Bundy, Dan Peterson, and Luques Curtis have performed and recorded with Wayne. He also formed his own New York based band, The Wayne Smith Quintet. The ambient influenced group marks Smith’s progression as he continues to merge his jazz fundamentals with his developing rock edge. He is contributing to the future of jazz as an educator at several high schools as well as providing private lessons for budding musicians.